A Life Fully Lived for God: A Tribute to Saara-Sofia

Saara-Sofia Salmen was a Finnish young woman whose mobilization journey kicked into gear when she attended the Kairos course in Spain in 2012. During the course, both she and her husband Samuli felt strongly the Lord´s calling for the growth of Kairos in Spain and in Finland. Saara-Sofia felt a strong calling especially for the mobilization of young people, and was eager to be trained as Youth Kairos Head Facilitator (YK HF) as soon as it was possible. She and her husband were planning to go as missionaries to Spain—where Saara-Sofia was raised as a missionary kid—to serve the growth of Simply Mobilizing in that country.

In June of last year, however, everything changed when she was diagnosed with brain cancer.

”Saara-Sofia was the second YK HF to be trained in Finland. She and Samuli were key people in bringing YK to Finland. In a video used in YK, John Piper said, ‘Don’t waste your life.’ The life of Saara-Sofia was definitely not wasted. She lived fully for God; she was such an inspiration to so many young people in Finland and elsewhere. She was a true mobilizer. Her passion and positive attitude were admirable; even in the midst of darkest valleys her trust in God was unshakable. Not even the cancer could steal her joy. She kept the faith, hope and love to the last breath. But she is now in better place, and her life was and is a great testimony to many.” 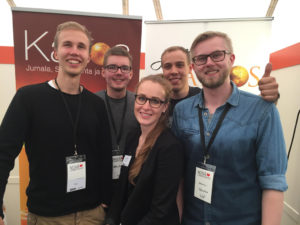 Saara-Sofia was one of the most gifted and passionate young mobilizers I have ever worked with. I count it a privilege and a joy to have met her during a Kairos in Spain, and stayed in touch with her.  Her love for people, her commitment to God’s mission and the cause of mobilization and her open heart and desire to learn were exemplary. She had such promise of a radiant life to be lived for many years for God’s glory. I was looking forward to seeing her and Samuli grow the SM movement in Spain, and I am deeply saddened by her death.

Saara-Sofia’s family is involved in mobilization as well. There was one memorable time when three generations of her family were simultaneously engaged in Kairos. Pertti, her father, was running Kairos in Spain, Saara-Sofia was running YK in Finland, and her niece and Pertti’s granddaughter, was a participant in YK—a first for our SM international family. Saara was a prophetic mobiliser in a family of prophetic mobilisers!

Saara-Sofia continued to give her testimony during the time she was sick. She had been planning for a Youth Kairos day for several months, just before she received news about the tumor’s growth. The event was finally held this year, only a few days before she passed away. Her father wrote, “Saara was very weak in hospital, but the whole day she was waiting for news from the youth who were leading the day. She was so proud of them and she trusted them because she herself had trained them.”

As the SM International Family, we honour Saara-Sofia. Please join in prayer for her husband Samuli, her nine-year-old daughter Sienna, her parents Pertti and Leena, and for the YK team and the whole Kairos family in Finland and Spain.

Pia Lewis, National Coordinator for Simply Mobilizing Finland, writes, “We grieve, but we know the One Whose we are, Who is above everything, and He holds everything in His hands.”

May Saara-Sofia’s life and death be an inspiration to many people and a challenge to young mobilizers to follow her example.