Have we come full circle? Do we find ourselves, today, in a mission context very similar to that of Paul and the early Church?

Mission in Paul’s day was E1* and E2*. Cultural adaptation of the message was necessary, but learning a new language was not! The cities of the Roman world, such as Ephesus, were centers of cultural diversity and interaction, similar to so many cities in our globalized world today. In Paul’s day, cities were ideal centers for the proclamation of the gospel and from where disciples could be made and sent back to their own country and people for gospel expansion. Cross-cultural mission was very much on the doorstep of the Church. Paul lived in a globalized world, albeit the Ro man world, and this world provided optimum opportunity for the gospel ‘s rapid spread – again, similar in so many ways to our world today.

Are we fully aware of the context for doing mission in today’s world and the approaches needed to maximize the amazing opportunities we find before us?

Our understanding of cross-cultural mission has been shaped by the modern mission era of the past two hundred years. This era coincided with the Colonial era of world history (world history and mission history often travel on parallel tracks).

In this era, cross-cultural mission was quite different from that of Paul’s era and that of the early church, and, I would venture to say, quite different from what we find in our world today! This was E3* mission, where the cultural and linguistic gap between the messengers and those in need of the message was huge! Countries were quite mono­ cultural then, most unlike the culturally diverse, multi-cultural countries of our world today. Mission was very much ‘from the West to the rest’; we had ‘missionary sending’ countries and ‘missionary receiving’ countries, and cross-cultural mission was the task of the trained professional. Long distances had to be traveled, often involving many months of dangerous sojourn with many missionaries never returning to their country of birth, choosing rather to be buried in their adopted country of service.

The modern mission era of the past was a ‘game changer’ and produced, in addition to an amazing missiology, the most geographically dispersed and the most culturally diverse expression of Christ’s Body in all of history! We now have some 700 million dedicated ‘followers of Jesus’ on planet earth located on every inhabitable continent and in every country of the world.

So does this new context change the way we think about mission and the way we do mission?

Well, it most certainly should! In fact, we could confidently say that if the William Careys, Hudson Taylors, CJ Studds, and others of the previous era were alive today, they most certainly ·would! These pacesetters of mission in their era would quickly discern the context of this day and adopt the most effective approaches as they did all
those years ago.

I am concerned that far too much of mission today is still being overly influenced by a Colonial era mindset. The ‘go’ or ‘send’ options of yester-era need to be seriously revisited in the light of the ‘from everywhere to everywhere’ context in this new era.

Perhaps I need to pause at this juncture and affirm my belief in continuing many of the approaches of the past mission era, but the harvest of a new era will not be achieved by simply doing what we have always done. So much of the world has changed, and so our approaches need to change as well. 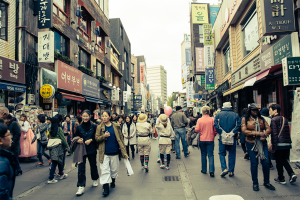 Our globalized world sees the messengers of the gospel nearer today, both geographically and culturally, to the world’s remaining unreached and unsaved than at any other time in world and Church history. What used to be the task of the ‘trained professional’ (the overseas missionary) can now and should be generously shared with the ‘ordinary’ Christian.

The mobilization of all God’s people and the training and equipping of believers into meaningful mission (both same culture and cross culture) where they live, has to be the single most strategic approach to mission in today world!

This isn’t just a good idea – it is God’s idea!

God’s method for world evangelization has always been ‘his people; hence his promise through the prophet Joel, in this New Testament era, to pour out his spirit on all his people (not just selected individuals as happened in the Old Testament). The purpose for this is clear – for world mission (Acts 2:17-18, 1:8.).

The amazing missiology formed from the previous era must be simplified and formatted for loc al church use – where arguably around 80% of all Christians are found. Church folk find themselves in regular contact with people representing unreached peoples. We must
ensure the messengers are well-prepared and equipped to deliver the message in this more challenging, cross-cultural context.

Several years ago, I was in Germany promoting a ministry that would see groups of German believers formed for the purpose of reaching out to the large Turkish and Kurdish communities in Germany. A missionary from another country working among the Turks in Germany initially disagreed with this approach, until he went home after the first day and passed by a Turkish food outlet to buy some food. While waiting for his order he engaged the Turk attendant in conversation. The attendant politely responded for a brief time, but eventually showed discomfort and moved away to busy himself with other chores.

The following day in class the missionary shared his experience and said, “These people are not silly. They know what a foreigner is doing in Germany speaking fluent Turkish!” He went on to say, “I will one day return to my home country but these German Christians will be here forever! It makes sense to train them to reach out to these people. These Turks will not respond to an invitation to my house but they most likely would respond to an invitation to visit the home of a German family – in fact, they would most likely feel quite honored by such an invitation”.

Every country in the world would have statistics that represent an Evangelical population, a number of unreached people groups and, of course, thousands and often millions of unsaved people. The key to doing fruitful mission in this era is the mobilization of all God’s people into active and meaningful participation. We can no longer afford to delegate this to trained professionals as we were forced to do in the previous era, due to distance, both geographical and cultural (E3). Mission today is predominantly E2 and El
as it was in Paul’s day!

We can all learn the cross-cultural skills necessary to share the gospel with unreached peoples that many of us rub shoulders with on a daily basis through work, community, social activities, etc. God has strategically placed these peoples on our doorstep- just as he said He would (Ac 17:26-27)!

I cannot conclude this reflection without mentioning the ministry that can best see this era of world mission fully maximized. It is the ministry of mobilizalion! For a ‘sleeping giant’ to become a ‘mobilized army’ the prophetic ministry of mobilization needs to emerge and take its rightful place and prophesy as Ezekiel did (Ez 37), without which the dry bones would have remained formless and lifeless!

Max Chismon is the International Director of Simply Mobilizing International (SMI). He and his wife founded the organization in response to a clear call to help mobilize the Filipino Church towards cross-cultural ministry to unreached peoples.
PrevPrevious PostInterpreting Scripture in the Context of Mission