Nameless Workers – the Future of the World Christian Movement

Recognizing and honoring the contribution of the ‘nameless’ workers in the world Christian movement is the key to the completion of the Great Commission! This is the true celebration of the ‘ministry of all believers; as Christ intended all along!

This pattern was first seen in the Book of Acts, when ‘nameless’ people planted the most significant church, possibly of all time, the church at Antioch (Ac 11:19-21)! Harold Cook the historian comments as follows:

“One thing is clear from the record. The spread of Christianity in the early centuries was not planned by the church nor any church officials. The church always seemed to have been a step or two behind. This was true when they sent Barnabas to confirm the new believers in Antioch (Ac 11). It was also true when they decided to add their approval to the work that Paul and Barnabas had already done among the Gentiles (Ac 15). In a very real sense the spread of Christianity was spontaneous. Like the spread of a forest fire!

These were the informal missionaries, in the sense that they felt compelled to give the gospel to those who did not have it. They might never travel abroad, but they might by persecution or other circumstances be forced to change their residence. The important thing was that they carried the fire wherever they went. And most of the Christian expansion was due to these nameless voluntary witnesses.” 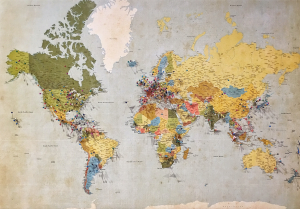 The most significant characteristic of world mission today is globalization. Mission is from everywhere to everywhere! The Church exists on every continent and in every country and so do the unreached! The whole idea of missionary sending countries and missionary receiving countries no longer exists and what used to be the exclusive domain of the professional missionary, no longer is!

The unreached, in large and sizable communities, are all through Europe, North America, Australasia as well as in countries of Africa and Asia, where strong, vibrant churches exist! Add to that the diaspora of some 400,000 Filipino Christians who, through employment opportunities, are working in countries that prohibit or restrict professional missionaries, not to mention sizable numbers of Christians from other countries of Asia and also Africa and Latin America.

The need to ‘equip the saints for the work of the ministry’ (Eph 4:13) has never been so urgent. Nor is the challenge, that we view the Church as a ‘movement’ and not as an ‘organization; so compelling!

This subject we will continue to explore in the weeks ahead!

Max Chismon is the International Director of Simply Mobilizing International (SMI). He and his wife founded the organization in response to a clear call to help mobilize the Filipino Church towards cross-cultural ministry to unreached peoples.
PrevPrevious PostVisions, Dreams, and Prophecies – Standard New Testament Practice!
Next PostSaved by Grace, Saved for Works: What are the Works We have Been Saved For?Next