The Ministry of ALL Believers – No Age nor Gender Restrictions

In his prophecy, Joel was careful to clarify God’s full intentions in pouring out His Spirit on “all people’.

It would result in the ingathering of a great harvest into Christ’s Kingdom involving people and peoples from all over the world, beginning at Jerusalem and ending at the uttermost parts of the earth (Ac 1:8, 2:21).

The harvesters of this great harvest, would be ‘all believers’! Joel is careful to qualify what he means by ‘all believers’ in case of any misunderstandings, due to the culture of the day, or previous held practices!

In terms of age, we see that God does not lift His Spirit from His people when they reach a certain age. Nor does He refuse His Spirit to those of a very young age. Our ministries change as we journey through various seasons of life but our effectiveness should increase – not decrease! An older generation should help ‘light the torch’ of a younger generation, to help them achieve fruitfulness in ministry, but never extinguish their own in the process. In that sense we never ‘pass the baton’ and exit the race. Our race is not finished until we are! 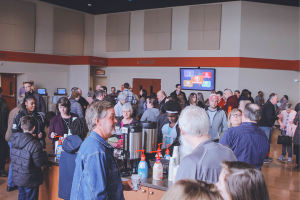 The issue of gender restrictions in ministry is a ‘hot potato’. It has been from the beginning and undoubtedly will be until Jesus returns! The Internet provides a vast array of convincing arguments from both sides. My own take on this is very simple. It has to do with the principle of ‘first mentioned’ – a principle of Bible hermeneutics accepted across the board!

This principle is seen when Jesus was confronted by a group of Pharisees. They thought they were on safe ground, when they stretched way back to the time of Moses, and used a law given by the great patriarch, as grounds for their liberal divorce practices. Jesus however went back even further. He went all the way back to the beginning and said, “But at the beginning of creation God ‘made them male and female: “For this reason a man will leave his father and mother and be united to his wife, and the two will become one flesh’. So they are no longer two, but one. Therefore what God has joined together, let man not separate:’ (Mk 10)

Joel’s prophecy marks the beginning of the Church age. Among other things, Joel’s prophecy establishes the doctrine of the ‘ministry of all believers’. There are some difficult passages in the New Testament regarding women in ministry however it is important that we measure them against this prophecy of Joel given at the beginning!

Cultural practices, and the interpretation of scripture through certain cultural lenses, has often caused a restriction in the full expression of women in ministry. Where these restrictions have not been imposed we have witnessed God doing extraordinary things! It is a fact that women have been the main custodians of mission history over the past two hundred years of the modern missionary era. This era has seen the non-western Church grow from 1% of the Evangelical community in 1800 to more than 70%, of some six hundred million believers, today!

With the Church world-wide composed of more women than men, we will do well to heed Paul’s injunction that in Christ there is neither male nor female (Gal 3:28). This end time harvest needs the full compliment of God’s harvest force – all whom the Holy Spirit has empowered – both men and women and both young and old!

Max Chismon is the International Director of Simply Mobilizing International (SMI). He and his wife founded the organization in response to a clear call to help mobilize the Filipino Church towards cross-cultural ministry to unreached peoples.
PrevPrevious PostThe Ministry of ALL Believers for the World Christian Movement
Next PostVisions, Dreams, and Prophecies – Standard New Testament Practice!Next