The word ‘mission’ has been defined “both by theology and context.

The context, for the past two hundred years, has been the ‘modern missionary movement’ that began, developed and grew during the Colonial period of world history. This period has shaped much of the way we have interpreted biblical passages that speak of the ‘mission of God’s people,’ and the way in which mission has been carried out.

Mission was understood, in general, as being essentially to foreign lands, primarily to underdeveloped countries, carried out by trained missionary professionals, requiring sending agencies, and represented in a local church by a department. One’s involvement was limited to the categories or ‘going; sending, ‘praying’ and ‘giving’. This era also produced colorful and emotive terms to encourage involvement in mission, such as ‘the Great Commission’ and ‘world evangelization’. All was understood and interpreted in the missional challenges of that day, which was taking the gospel to the spiritually dark continents of Africa, Asia and the Americas.

The huge advances of the gospel throughout the world during the past two hundred years is testimony lo the effectiveness in which the Church responded to its missional challenges, interpreted the biblical mandate and produced a missiology suited for their day. Even secular historians, have chipped in with acknowledgements in using such terms as ‘Evangelical Empire’ to describe the extraordinary growth of Christianity during this two hundred year period.

The world, however, moves on – with the Church, unfortunately, lagging behind, reluctant to embrace the challenges that change brings, The Colonial world of our forefathers has now given way to a globalized world. The context in which we must carry out our mission mandate has changed. Alas, I fear, much of the Church is still doing mission with a Colonial era mindset.

The mission terms, for example, and the way they were defined and understood, which served the Church so well in the modern missionary era can actually do a disservice to the Church in this new era of world mission. I do believe that we need to redefine our mission terms in order to mobilize a new generation of the Church to be effective in mission in today’s globalized world. The terms are great but a new definition for them is needed!

The Mission of God

The ‘Mission of God’ is that big purpose of God whose goal is the ‘reconciliation of all things’ (Col 1:20). All things affected by sin and the fall. This refers to all humanity, all of nature, governments, authorities and principalities and powers. In fact, the ‘mission of God’ is not only to right every wrong and to put back into divine order everything outside of that order, it is to complete God’s glorious plan which He purposed before the world began. A plan that we see in part in the early chapters of Genesis and gloriously brought to completion in Revelation chapters 21 and 22.

This ‘mission’ that God has been on since the beginning of creation, covers the entire Old and New Testaments and will be completed at the end of time, with the appearing of our Lord Jesus Christ (1Co 15:24-28).

The Mission of God’s People

The Ministry of Reconciliation 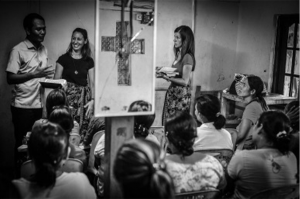 Primarily, this apportioned mission to the Church has to do with the reconciliation of peoples and people to God, through Christ (2Co 5:17-20). It combines both the ‘make disciples of all nations (all peoples)’ idea of Mt 28:19, with the ‘preach the gospel to all creation (all people)’ idea of Mk 16:15, or as the NLT puts it ;to everyone’. This highlights both the ‘same culture’ and ‘cross-culture’ idea of ‘the mission of God’s people; including the ‘regions beyond’ challenge, together with the continuation of the ‘ministry of reconciliation’ among reached peoples.

A Witness to All Nations

Christ promised the world, through the Church, a ‘witness’ of the power of the gospel of the Kingdom (MT 24:14). There is an unmistakable expectation in scripture that ‘reconciled people’ will be transformed in altitude and behavior (Ro 13:14, Ga 3:27). When reconciled people gather together and/or become a ‘critical mass’ within a community that community is given a privileged glimpse into what the coming age of Christ’s Kingdom will be like. They receive the ‘testimony’ of God’s new creation or new humanity – of what it truly means lo be human the way God intended from the very beginning (Ac 2:47,1Pe 2:11-12)!

Note: The reconciliation of ‘all things’ awaits the appearing of our Lord Jesus Christ. This is something He will finalize when He returns. Peter, in Acts 3:21, is recorded as saying that Jesus must be retained in heaven until the time of the reconciliation of all things. John is quite clear that in this age the whole world is under the power of the evil one (1Jn 5:19).Until this changes we remain as ‘aliens and strangers in this world’ (1Pe 2:11). With these comments I would challenge the notion, held by some, that the Church is meant to ‘Christianize the world; in this age, and to see righteousness legislated among all nations prior to the return of Christ. This, I see, as not only erroneous but very damaging to the very clear and most essential call of the Church, which is to reconcile peoples and people to God through the gospel of Christ.

Mission, as it relates to the Church, is ‘the Mission of God’s People’. It is that ‘ministry of reconciliation’ or the ‘ministry of the new covenant’ (2Co 3:6). It is primarily concerned with God’s quest for ‘taking out of the world (from among the nations of the world) a people for His name’ (Ac 15: 13 18), as described above, more fully, under the heading of ‘The Mission of God’s People.’

Missions, is the activities, we engage in, to fulfill mission. Mission activities (missions) engage in both ‘same culture’ and ‘cross-culture’ ministry. It is concerned with both reaching unreached peoples in regions beyond (2Co 10:16) and evangelizing unsaved people in reached people groups. Missionsis what we call our outreach activities, strategies, and initiatives designed to fulfill this Biblical mission mandate of the Church.

Mission Defines the Existence of the Church

Mission defines our existence on earth as the people of God. There is no greater purpose found in the word of God that explains why we exist on this planet, what we should be primarily engaged in, and why Christ has not yet appeared!

Local churches that are the primary visible expression of the universal Church exist for mission and therefore to engage in missions.

The problem has been that the definitions of mission, shaped by the Colonial era, made this position impossible. No local church, could every agree, to their church’s existence being defined for the purpose of ‘foreign missions’ alone, which was how mission was understood during that period. They 1Nere acutely aware, and quite rightly so, of a local church’s responsibility for outreach in the local community and among their own people group.

However, with the definition I have suggested, every local church can accept that mission can indeed define their existence as it covers both foreign and local mission and same culture and cross culture mission. It covers also their collective ‘witness’ in their communities as representing Christ’s Kingdom and God’s new humanity!

The Bible demands our selfless and sacrificial involvement in mission, as does this era of world history, 1Nith its greater than ever population, more numerous people groups and desperate spiritual and social needs. Identifying the challenges, clarifying the task, making plain our role, is vital to the mobilization of the largest and most culturally diverse expression of the Body of Christ every to be present on earth in any one generation. Defining the terms and arriving at shared meaning, is just one step in a number of critical steps, in a long journey, to see the Church of this generation mobilized for what could be the last generation of the Church and the final harvest!

Max Chismon is the International Director of Simply Mobilizing International (SMI). He and his wife founded the organization in response to a clear call to help mobilize the Filipino Church towards cross-cultural ministry to unreached peoples.
PrevPrevious PostThe Things That MUST HAPPEN Before The Lord Will Return
Next PostInterpreting Scripture in the Context of MissionNext